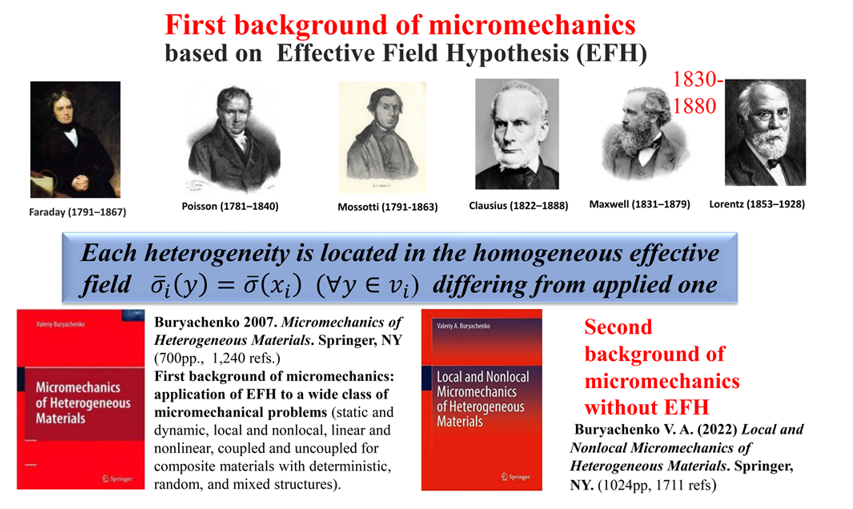 Unlike many other fields in material science, the evolution of composites and nanocomposites to its anticipated level of importance in general significantly depends on the contributions from modeling and simulation. The most popular methods of analytical micromechanics are based just on a few basic concepts. The effective field hypothesis (EFH) which dates back to Poisson, Faraday, Mossotti, Clausius, Lorenz, and Maxwell (1824-1879). This concept of EFH  (forming the first background of micromechanics, see for details [1]) has directed a development of micromechanics (even if the term EFH was not used) over the last 150 years (daily and globally) and made contribution to their progress incomparable with any other concept of  analytical micromechanics.  Only in 2010  a total domination of EFH in  micromechanics was suspended by the author by a proposal of a new general integral equation (GIE) forming, in fact, the second background of micromechanics called also computational analytical micromechanics (CAM, the author term, see for details [2]).  It offers opportunities for a fundamental jump in multiscale and multiphysics research with drastically improved accuracy of local field estimations (even to the point of correction of a sign in some points inside the inclusions), that is critical for advanced material development (especially for nonlinear modeling). Due to its generality, CAM is very flexible and based on physically clear hypotheses which can be modified and improved, if necessary, with incorporation of modifying blocks exploiting a wide spectrum of both linear and nonlinear numerical methods. Fundamentally new achievement of the version of CAM proposed is overcoming of conceptual restrictions of identification methods based on either the notion of representative volume element (RVE) or full-field measurements produced by a finite size of the samples. Some particular versions of the CAM were analyzed  for the wide class of static and dynamical, local and nonlocal (e.g. peridynamic), linear and nonlinear multiscale problems (thermoelasticity, thermoelastoplasticity, conductivity, piezoelectricity, strength, fracture, nonlinear elasticity, viscosity, creep and other) of composites and nanocomposites with deterministic, random (statistically homogeneous and inhomogeneous, so-called graded) and mixed structures in the bounded and unbounded domains, containing the coated or uncoated inclusions of any shape and orientation and subjected to the coupled or uncoupled, homogeneous or inhomogeneous external fields of different physical natures.  CAM is an affordable, adaptable, robust, physics-based, and data-driven multidisciplinary design and optimization toolkit greatly speeding the rate of technological advance in order to execute fundamental and applied research to provide the key technologies and analytical support of the Universities, National Labs, and industrial companies. However, these opportunities of CAM can be realized only in the case of joint efforts of both computational micromechanic's society and the analytical one as well as material science and physics societies.

Valeriy A. Buryachenko received his MS degree in Mathematics from M.V. Lomonosov Moscow State University, Moscow, USSR, his PhD degree in Material Science from the Chemical Production Engineering in Moscow, USSR; and his DSc degree in Mechanical Engng (Mechanics of Solids) from SP Timoshenko Institute of Mechanics (NAS of Ukraine, Kiev, Ukraine). He is the author of 160 papers in micromechanics and the two books “Micromechanics of Heterogeneous Materials," Springer, NY (2007) and “Local and Nonlocal Micromechanics of Heterogeneous Materials," Springer, NY (2022). His main achievement is a creation of a new (the second) background of analytical micromechanics of composites. He is a President of a small consulting company Micromechanics & Composites LLC. Prior this, he worked in the leading Research centers and universities of USA, Italy, Austria, and Germany. Prior this, he worked as a Senior Res. Scientist in the Research institutes and a Full Professor of Math in the Moscow Univ. of Chemical Engineering Industry, Moscow, Russian Federation.