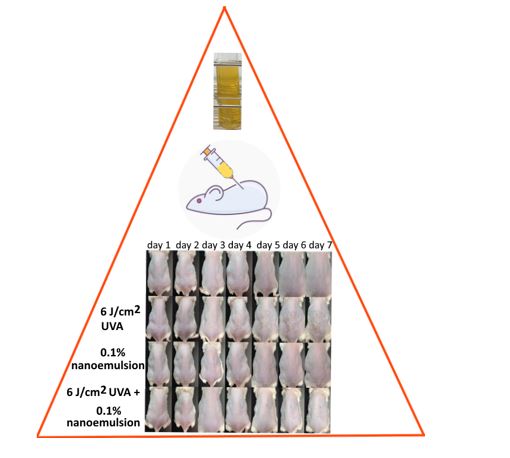 Coffee grounds, a waste by product generated after coffee-making, contains about 15% coffee oil and can be used as raw material in cosmetics. Algae oil rich in docosahexaenoic acid (DHA) has been demonstrated to possess anti-cancer and anti-inflammation activities. The objectives of this study were to develop a GC-MS method for determination of fatty acids in coffee oil and algae oil and prepare a nanoemulsion for studying its inhibition effect on ultraviolet A-induced mice skin damage and growth of melanoma cells B16-F10. A total of 8 and 5 fatty acids were separated and quantified in coffee oil and algae oil by GC-MS, respectively, with linoleic acid (39.8%) dominating in the former and DHA (33.9%) in the latter. A nanoemulsion with a particle size of 30 nm, zeta potential -72.72 mV and DHA encapsulation efficiency 100% was prepared by using coffee oil, algae oil, surfactant (20% Span-80 and 80% Tween-80) and deionized water. Differential scanning calorimeter analysis revealed a high stability of nanoemulsion when heated up to 110°C at pH 6, whereas no significant change in particle-size distribution and pH occurred over a 90-day storage period at 4°C. Animal experiments showed that a dose of 0.1% coffee oil-algae oil nanoemulsion was effective in mitigating trans-epidermal water loss, skin erythema, melanin formation, and subcutaneous blood flow. Cytotoxicity test implied effective inhibition of melanoma cell growth by nanoemulsion with an IC50 value of 26.5 mg/mL and the cell cycle arrested at G2/M phase. A dose-dependent up-regulation of p53, p21, cyclin B and cyclin A expressions and down-regulation of CDK1 and CDK2 occurred. Also, both Bax and cytochrome c expressions were up-regulated and bcl-2 expression down-regulated, accompanied by a rise in caspase-3, caspase-8, and caspase-9 activities for apoptosis execution. Collectively, the apoptosis pathway of melanoma cells B16-F10 may involve both mitochondria and death receptor.

Bing-Huei Chen, male, food scientist, received his Ph.D. degree in Food Science & Technology, Texas A & M University, USA in 1988. His postgraduate career includes working at Fu Jen University, Taipei, Taiwan as Associate Professor from 1988–1994, Professor from 1994–2004, Distinguished Chair Professor from 2003–present, Chair of Department of Nutrition and Food Science from 1994-2000, Director of Graduate Institute of Medicine from 2006–2009, and Dean of College of Human Ecology from 2012–2015. He specializes in Lipid Chemistry, Pigment Chemistry, Instrumental Analysis, Food Toxicology, Functional Food and Botanical Drug Development and Biological Activity Determination as well as Nanotechnology. Until now he has published over 200 research articles in internationally renowned journals and authored 11 book chapters in edited books published by International Publishers. He has received numerous awards including the prestigious National Invention Gold Medal Award by Ministry of Economics, Taiwan in 2018 and was honored with Outstanding Research Scientist by Ministry of Science and Technology, Taiwan. He was also honored with International Outstanding Inventor of Biotechnology by Taiwan Inventor Association/ International Innovation and Invention Alliance Association in 2019 and Distinguished Professor by Chinese Academy of Agricultural Sciences, China in 2015. Most importantly, Prof. Chen has developed a nano-product “Lycopene Chylomicron”, which has completed a phase III clinical trial in both Taiwan and USA in 2017 and demonstrated to be effective in the treatment of patients with prostatauxe syndrome. Expectedly, this product will become the first botanic drug in the world for treatment of patients with prostatauxe syndrome without side effect. He also serves as Editor-in-Chief of the journal “Recent Patents on Food, Nutrition and Agriculture” and Associate Editor of 2 journals “Journal of Food & Drug Analysis” and “Asian Science Bulletin”. In addition, he serves on the editorial board of 140 journals. Currently he is the President of Professors Association, Taiwan and was the Past President of AOAC Taiwan section from 2016-2018.