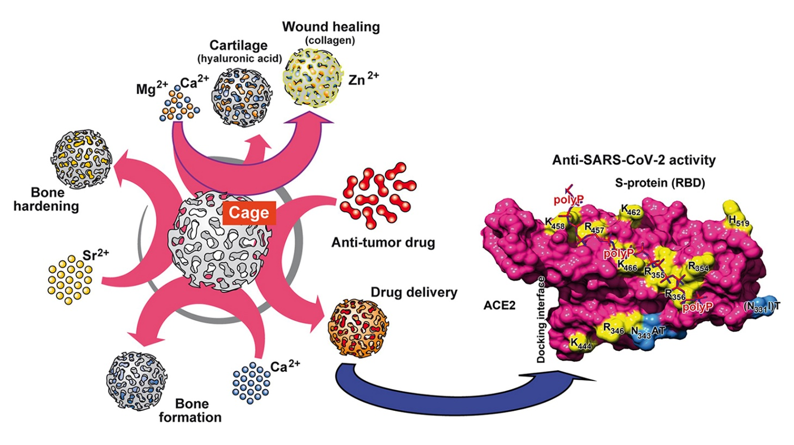 Inorganic polyphosphate (polyP) is one of the oldest chemical energy-providing molecules in biological systems. This polymer, containing a much longer sequence of high-energy phosphate units than the universal energy donor adenosine triphosphate (ATP), has attracted increasing attention for potential biomedical applications because of its diverse metabolic and regulatory functions and its ability to form biologically active nano/microparticles. In its particulate form, polyP is not biologically active but these particles easily transform into a coacervate form in which polyP is biologically active. polyP can be easily combined with other materials used in tissue engineering, e.g., for the production of bioprintable bioinks (even for cell printing) or stable polymers such as polymethacrylate of polycaprolactone. In this way, the material could be applied not only as a filler, but also for the fabrication of larger mechanically more stable implants. In addition, together with other negative polyanions, polyP is able to selforganize the presence of divalent cations to polymer bundles stabilized by Ca2+ bridges, or polyP nano/microparticles can be created in situ from polyP incorporated into certain hydrogels. Through the selection of suitable hydrogel-forming polymers and controlled hardening via calcium ions, hybrid biomaterials of defined porosity and mechanical properties can be fabricated, which are not only morphogenetically active, i.e., capable of promoting cell growth, differentiation and migration via specific gene induction, but also provide the cells with the energy needed for their function, including those processes which proceed in the extracellular space. With the discovery of polyP and the characterization of the multiple functions of this energy-rich biopolymer, a new physiological molecule has been introduced into the growing group of biomaterials of biomedical interest, which adds a novel principle: metabolic energy-delivery in addition to morphogenetic/regenerative activity. There is no other biomaterial that is provided with this property combination. Very recently, we investigated the effect of polyP in innate immunity on the binding of the receptor-binding domain (RBD) of the SARS-CoV-2 spike protein to the cellular ACE2 receptor and disclosed a potential therapeutic benefit of polyP against SARS-CoV-2 infection.

Werner Ernst Georg Müller (born August 19, 1942 in Sprendlingen ) is a German biochemist who teaches as a professor at the University of Mainz . In 2007, Müller received the Paul J. Scheuer Prize . In 2014, he received the Federal Cross of Merit, First Class , for his involvement in the development of the first drugs to treat Creutzfeldt-Jakob disease and HIV encephalopathy .  Werner EG Müller conducts research on molecular processes of biomineralization starting from siliceous sponges . The aim of the research is the production of materials for medical applications.