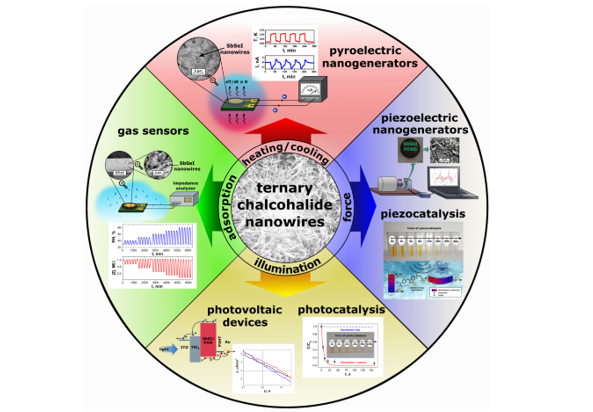 Ternary chalcohalides, denoted as AVBVICVII, are materials composed of elements from 15, 16, and 17 groups of periodic table, where AV means usually arsenic, antimony or bismuth, BVI refers to sulfur, selenium or tellurium, and CVII denotes chlorine, bromine or iodine. The first reports on this group of chemical compounds were published in the beginning of the 19th century. The intensive studies of ternary chalcohalide bulk crystals started in the early 60s of the 20th Century. Recently, many fabrication methods (e.g., vapor-phase growth, hydrothermal synthesis, solution processing, ultrasonic spray pyrolysis, sonochemical synthesis) have been developed to prepare chalcohalide nanomaterials with different morphologies. The latter mentioned fabrication technique is based on application of powerful ultrasounds, which provide the unusual local conditions for growth of one-dimensional nanocrystals. Therefore, sonochemical synthesis is a simple and fast way to fabricate nanowires of antimony sulfoiodide (SbSI) and antimony selenoiodide (SbSeI). The majority of members of the chalcohalide family, including SbSI and SbSeI, are ferroelectrics. These materials possess several unique properties related to a spontaneous polarization, which is induced by an asymmetric crystal structure occurring below the Curie temperature. Ferroelectric chalcohalide nanowires exhibit a wide spectrum of remarkable features, like pyroelectricity, piezoelectricity, ferroelectric-photovoltaic properties, high dielectric permittivity, piezo- and photocatalytic activity. This paper presents recent achievements in the chalcohalide nanowires preparation and their application in energy harvesting, sensing, and environmental remediation. In 2019, a facile and scalable fabrication method of SbSeI pyroelectric nanogenerator was presented for the first time [1]. This device was subjected to thermal fluctuations in order to convert a low temperature waste heat into an electrical energy. The pyroelectric figures of merit, determined for SbSeI nanowires, were significantly higher than corresponding parameters of pyroelectric generators constructed from other nanomaterials. A method based on high pressure compression of SbSeI nanowires, similar to this described in [1], was used to prepare piezoelectric nanogenerator [2]. It was applied successfully for mechanical energy scavenging as well as for the detection of low frequency dynamic pressure changes and vibrations. Recently [3], SbSI nanowires were utilized as visible light absorbers in the hybrid organic-inorganic photovoltaic devices. They are promising for solar energy harvesting and application in photodetectors, that can operate in a self-powered mode. The chalcohalide nanowires possess a high surface to volume ratio. This feature makes them suitable for the application in gas sensors with excellent repeatability, long-term stability, and good sensitivity [4]. One-dimensional morphology, outstanding piezoelectric and photoelectric properties of the chalcohalide nanowires ensure their ultra-high catalytic activity under ultrasonic vibration or UV illumination. In 2020, SbSI nanowires were confirmed to be efficient piezo/photo-catalysts that can degrade organic pollutants in wastewater [5]. It opened a way to future utilization of this nanomaterial to carry out processes of environmental purification. Finally, the new trends and prospects for fabrication and applications of chalcohalide nanowires are also discussed in this paper.

Krystian Mistewicz was born in 1986. He received MSc in physics with honors at the Mathematics and Physics Faculty at the Silesian University of Technology (Gliwice, Poland) in 2010 and Ph.D. in Physics with distinction from the University of Silesia (Katowice, Poland) in 2015. He received “DoktoRIS” Scholarship Program for Innovative Silesia and “SWIFT” Scholarship Supporting Innovative Technology Forum co-funded by the European Union in 2014 and 2012, respectively. Currently, he is an assistant professor at Institute of Physics at the Silesian University of Technology (Gliwice, Poland). Dr. Mistewicz has been a visiting research scholar at the University of Wisconsin-Madison, College of Engineering, Department of Materials Science and Engineering. He worked under J-1 Exchange Program, which began on December 15, 2020 and continued through February 14, 2021. The main subject of Dr. Mistewicz’s research during this exchange program was to investigate ferroelectric nanomaterials for nanogenerators and sensors. Krystian Mistewicz is a topic editor of “Crystals” Journal (ISSN: 2073-4352) and editorial board member of “Nanoparticle” (ISSN: 2767-0171). He has been a member of the International Association of Advanced Materials (Sweden) since 2017. Krystian Mistewicz is co-author of more than 25 articles published in the international journals, 3 chapters in the books, and 2 patents granted by Polish Patent Office. His research interests are focused on nanotechnology, sonochemistry, ferroelectric nanomaterials for gas sensors, photovoltaic devices, pyroelectric and piezoelectric generators.