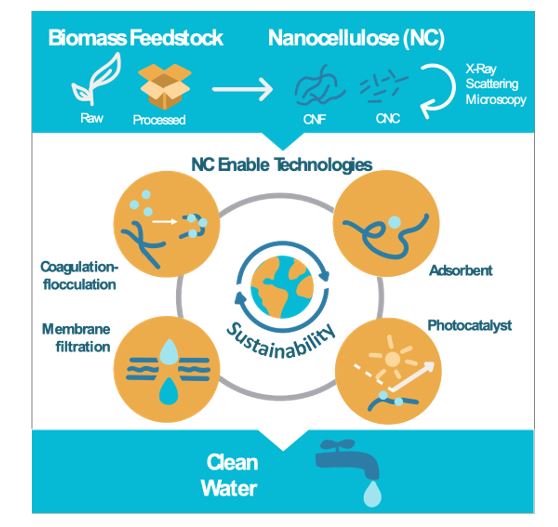 Nanocellulose is a nature-based sustainable biomaterial, which not only poses molecular cellulosic properties but also has several important hallmarks of nanomaterial, such as large surface area, versatile reactive sites or functionalities and scaffolding ability. These unfold new opportunities for nanotechnology and its broad-spectrum applications for clean water production that were once assumed scientifically non-viable. Recently, our team at Stony Brook University has developed a simple, inexpensive and environmentally friendly approach to preparing nanocellulose for water purification, based on a nitro-oxidation reaction carried out on biomasses of diverse origins [1-5]. There are three key advantages of the nitro-oxidation method. First, the method greatly reduces the consumption of chemicals, energy and water. Second, the processing effluent can be efficaciously neutralized to produce plant fertilizers. Third, the method is effective to extract nanostructured cellulose from underutilized raw biomass such as agriculture residues. There are two distinct processes in the nitro-oxidation approach: (1) delignification (pulping/bleaching) of various plants and (2) oxidation of cellulose. To make nanocellulosic materials, both delignification and oxidation are needed. However, delignification is a rapid process, but oxidation of cellulose is a slow process. The novelty of the nitro-oxidation technology is that it´s particularly useful for non-woody plants such as agricultural residues, if they have a lower lignin content and more porous structure, thus demanding less nitric acid/NOx. This advantage, in combination with the conversion of the spent liquor into a functional fertilizer, expensive liquor recycling can be avoided. The resulting nanocellulose is proven to be efficient water purification agents as coagulants, flocculants, adsorbents, photocatalysts and membrane filtration materials to treat a wide range of water pollution problems. We have recently demonstrated the utilization of nanocellulose as an adsorbent to remove and recover N-nutrients from wastewater, where the N-adsorbed adsorbent can be further used as N-fertilizer supplement. The demonstrated technology represents an innovative means to enhance the nexus of food, energy, and water systems, and has many far-reaching impacts to improve quality of life.

BSH acknowledges the financial support by the Polymer Program, Division of Materials Science of the US National Science Foundation, and The Prince Sultan bin Abdulaziz International Prize for Water (PSIPW) - The Creativity Prize.

Benjamin S. Hsiao is a Distinguished Professor in Chemistry at Stony Brook University, USA. He is the Founding Director of the New York State’s Center for Advanced Technology in Integrated Electric Energy Systems. Hsiao has a notable reputation in polymer science and water purification. He published over 537 peer-reviewed scientific papers, 56 reviews and chapters in books and encyclopedias, 232 proceedings and preprints, obtained 55 issued patents (including 33 US patents) and 25 pending patent applications, and edited 2 books. He has also given over 344 invited lectures in universities, governmental and industrial research institutes, as well as over 579 presentations in national and international scientific meetings. His current research interests are focused on the development of sustainable nanomaterials from underutilized biomass for water purification. In specific, Hsiao and his team have developed a simple nitro-oxidation method to prepare nanocellulose directly from raw biomass, where the method, combining the steps of pulping and cellulose oxidation, drastically decreases the consumption of electrical energy, chemicals and water. They have also demonstrated highly permeable membrane technologies using nanofibrous materials for a broad spectrum of air and water purification applications. Hsiao was elected as Fellow of American Association for the Advancement of Science (AAAS), American Chemical Society, American Physical Society, Materials Research Society, and National Academy of Inventors, and received AAAS-Lemelson Foundation Invention Ambassador, Chang-Jiang Scholar from Education Ministry of China, and The Prince Sultan bin Abdulaziz International Prize for Water - The Creativity Prize.