Liquid Metals to Fuel Next Generation Science, Technology, and Industry 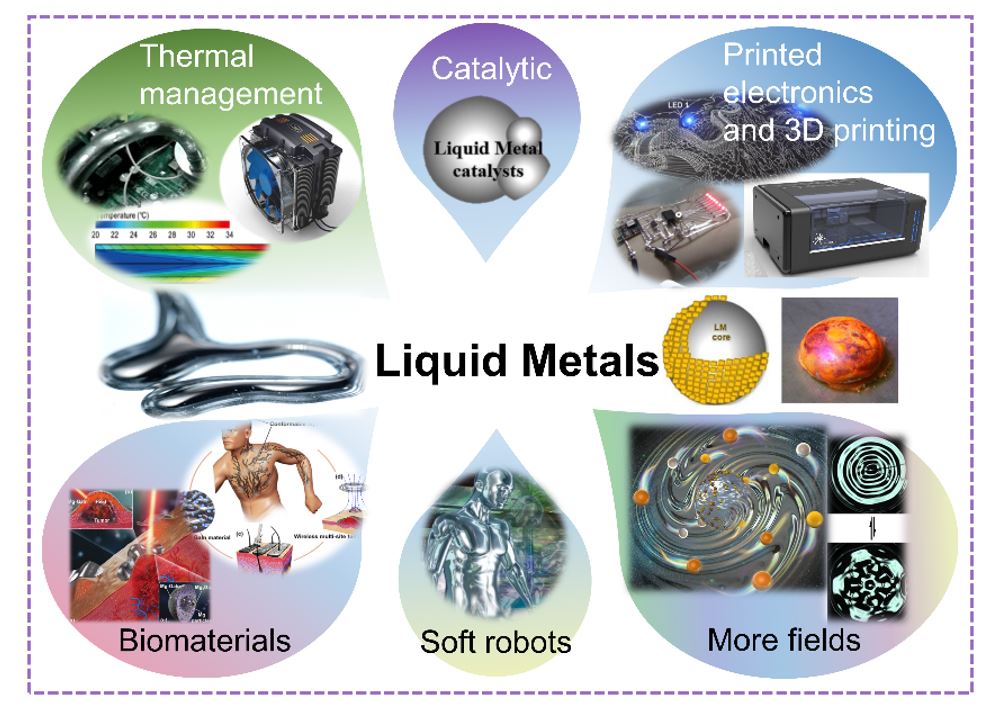 The room temperature liquid metals and their allied matters are a big class of newly emerging fundamental materials inherited with many fascinating properties and exciting application potentials which had never been anticipated in the old days. Particularly, their pretty easy transition between solid and liquid states endorse such materials with tremendous unconventional capabilities. Examples are rather diverse covering nearly all physical, chemical and engineering fields. From the thermal fluidic aspect, the emergence of the liquid metal electronic cooling at the early of this century opens revolutionary ways to break up the "thermal barrier" seriously challenging the worldwide high integration chips. In the electrical engineering category, the inventions of the liquid metal printed electronics and room temperature 3D metal printing in a little late time reshaped the rules of classical electronic and integrated circuit manufacturing, which are promoting such pervasively available electrical making tools into people's daily life. While for the health care of human being, the proposition of the liquid metal biomaterials at almost the same time brought about entirely new vision for tackling the major biomedical challenges. Along these endeavours, many scientific discoveries as achieved on liquid metals fundamentally stimulated the coming of a new era of soft robots: transformable liquid metal machines. All these exploded explorations open the huge space for the liquid metals to power next generation science, technology and industry. In this lecture, a brief glimpse and overview on recent liquid metal R&D activities over the world, especially in the author’s lab, will be given. Typical innovations on liquid metal materials, fundamental performances and scientific phenomena lying behind will be interpreted. Following that, a group of key technological and industrial applications will be illustrated which include but are not limited to: Liquid metal chip cooling and energy system, liquid metal printed electronics and 3D printing, liquid metal biomedical materials as well as liquid metal smart soft machines etc. Further, taking the industrial progress as examples, the foundation and practices of “The China Liquid Metal Valley” as well as efforts made there to mould a brand new industry of liquid metals will be introduced. Finally, some basic road map towards liquid metal material discovery will be summarized. Overall, the rise of the liquid metal science means many, not only academics but also society. It will be sure to help incubate pivotal progress of human civilization until finally change future industrial production ways and social life styles. As one classical proverb says, “one generation material represents one new era”. What we need to do in this day and age is just to try our best to investigate, utilize and advance such powerful and magic materials.

This work was supported by the NSFC Projects under Grants No.51890893 and 91748206, as well as Tsinghua University, and Chinese Academy of Sciences.

Jing Liu is a jointly appointed Professor of Tsinghua University (THU) and Technical Institute of Physics and Chemistry, Chinese Academy of Sciences. He received his double bachelor’s degrees (B.E. in Engineering & B.S. in Physics) in 1992, and Ph.D. (in Engineering and Biomedicine) in 1996, all from THU. Dr. Liu had ever been a Post-Doctorial Research Associate at Purdue University and a Senior Visiting Scholar at Massachusetts Institute of Technology. He works at the interdisciplinary areas among liquid metals, biomedical engineering and thermal science and is an author of 17 books on cutting edge frontiers, 23 invited book chapters and more than 500 journal articles (over 40 selected as cover or back cover story), as well as over 300 issued invention patents. Dr. Liu pioneered many pivotal fundamental discoveries and technological breakthroughs on liquid metals such as transformable liquid metal machines, liquid metal printed electronics and 3D printing, liquid metal biomaterials and liquid metal chip cooling etc. which were frequently featured over the world and by the science medium such as MIT Technology Review, New Scientist, and IEEE Spectrum etc. Many of his inventions have been widely used in industry and by the society. Dr. Liu proposed and help initiated the China Liquid Metal Valley and a new industry of liquid metal. He is a recipient of numerous awards like: The William Begell Medal (issued internationally to only an individual every four years), 2015 R&D 100 Awards Finalist, 2010-2011 Best Paper of the Year Award from ASME Journal of Electronic Packaging, CCTV 2015 Top Ten Figures in Science and Technological Innovation and eight times highest teaching award from CAS and THU etc.