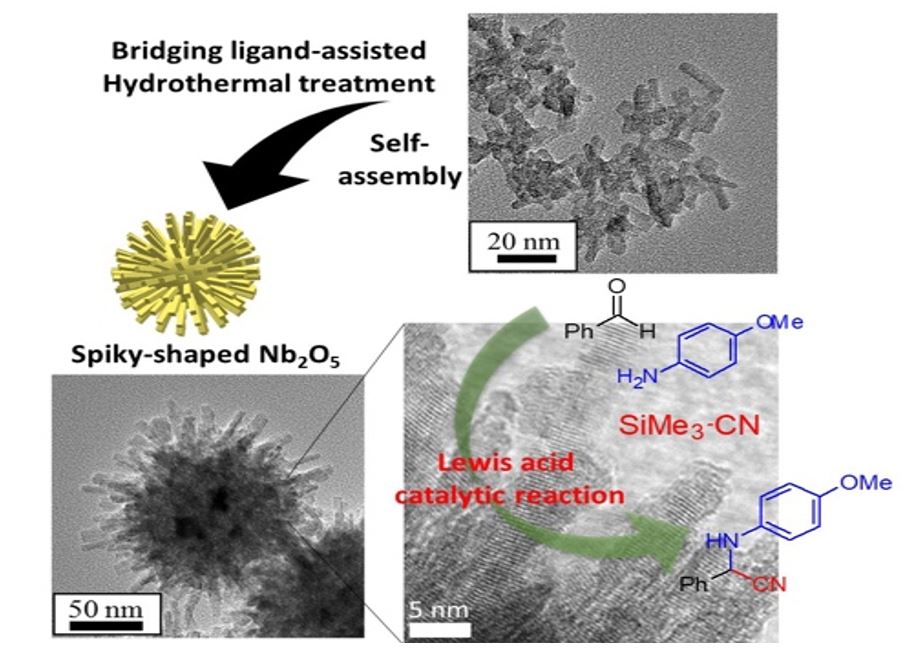 Solid acid catalysts are expected to be highly reactive, recoverable and recyclable, leading to the establishment of environmentally friendly chemical process. Niobium oxides have been widely studied as an insoluble and water-tolerant solid acid catalyst for various water-mediated reactions, such as esterification, hydrolysis, and hydration. Nano-sized niobium oxides therefore seems to demonstrate superior catalytic performance compared with bulk oxides due to their large surface area and specific surface structure. However, nanonization of the niobium oxides may reduce their structural stability; i.e., the nanoparticles are self-aggregated and sintered during the reaction and thermal cleaning. We have demonstrated that complex three-dimensional (3D) nanostructures formed by an accumulation of single nano-sized niobium oxides show higher stability than simple-shaped nanostructure because of the highly controlled morphology [1,2].

In this study, niobium pentoxide particles with a complex 3D nanostructure consisting of a spiky structure have been developed as recyclable and recoverable Lewis acid catalysts. The morphology of the niobium pentoxide was controlled from 1D to 3D without changing the crystal structure via a bridging-ligand-assisted hydrothermal treatment, as follows. Nb oxalate solutions were synthesized by dissolving a niobium(V) oxide hydrate into an oxalic acid solution with various concentrations of oxalic acid. The solutions were hydrothermally treated at 200 °C for 2 h. Nb2O5 1D nanorods with a major-axis length and minor-axis length of 20 nm and 5–8 nm, respectively, were obtained from the solution with a low concentration of oxalic acid. Spiky-shaped Nb2O5 composed of 300 nm spherical cores and nanorods with a minor-axis length of 5 nm was obtained with a high oxalic acid concentration. Compared with dispersed Nb2O5 nanorods, the spiky-shaped Nb2O5 maintained its surface nanostructure even after calcination at 400 °C in air. Furthermore, the 400 °C-calcined spiky Nb2O5 particles exhibited a higher production rate of 2-((4-methoxyphenyl)amino)-2-phenylacetonitrile (0.115 mmol m−2) in a Strecker reaction than the 400 °C-calcined Nb2O5 nanorods. Acid site analysis and Raman spectroscopy revealed that stable nanorods that grew in the (001) orientation functioned as Lewis acid catalysts. These results indicate a nanoscale and ordered surface structure of spiky particles simultaneously exhibit high specific reactivity and high structural stability.

This work was supported by Frontier Research Institute for Materials Science, Nagoya Institute of Technology, Japan.