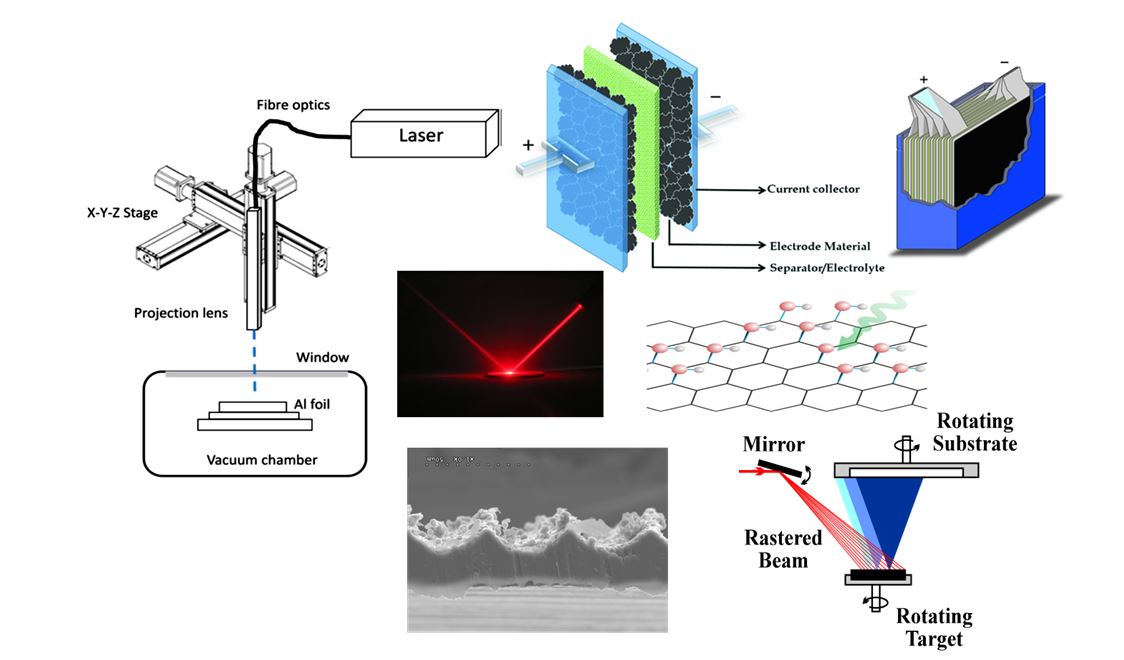 Supercapacitors are among the most promising energy storage devices due to their high-power density, short recharging time, long cycle life, as well as environmental friendliness. Supercapacitors with increased energy densities are needed for practical applications such as plug-in hybrid electric vehicles, wind turbine energy storage, regenerative breaking, cold starting of trucks and space exploration applications. In this seminar, I will present our current efforts to extend the use of laser ablation for processing of electrode active materials [1,2] and components [3,4] for supercapacitors. The use of the distinguishing properties of laser, such as being able to achieve very high energy density by focusing, to travel at a great distance due to their low divergence and temporal coherence, to vary wavelength to cover UV, visible and IR ranges, and to provide strong peak power with short pulse such as femtosecond and picosecond laser, for processing energy material and components for supercapacitors will be demonstrated through a few examples: fabrication of graphene by means of laser photochemical/photothermal reduction; exploitation of pseudo-capacitance behaviours of PLD deposited manganese oxide thin films of different oxidation states and dopants, and surface roughening of thin Al foil current collectors by laser ablation in vacuum to reduce interfacial resistance. The results show that laser is a unique, flexible and high-performance energy source for processing materials with better controlled properties and microstructures and it has great potential for energy storage device applications.

The authors would like to thank Transport Canada and the PERD program of Natural Resources Canada and NRC’s Vehicle Propulsion Technologies program for their financial support. The authors are indebted to their colleagues: Dr. Alexis Laforgue, Dr. Christina Bock, Dr. Lei Zhang, Dr. Jim Tunney and Mr. Oltion Kodra for their collaboration in the supercapacitor projects, as well as Mr. B. Gibson and Mr. M. Zeman of NRC-London for their technical assistance.

Dongfang Yang received his Ph.D. in Physical Chemistry from the University of Guelph in 1995. After graduating from the University of Guelph, he worked at the University of Ottawa and National Research Council Canada in Ottawa both as a research associate. In 1999, he moved to US to work as a senior electrochemist at Upscale Water Technologies Inc. in Miami and then move back to Canada in the same year to work as a Research Chemist at the Centre for Nuclear Energy Research at Fredericton, New Brunswick. Since 2001, He joined the National Research Council of Canada in London, Ontario and is now a Senior Research Officer. His current research interests include laser materials processing; pulsed laser, sputtering and e-beam deposition of thin films; new materials development for energy storage devices; chemical, optical and thermal sensor development, and electrochemical studies of organic adsorption and self-assembly monolayer. In his career he has edited 3 books and authored 5 book chapters, 3 patents, and over 65 scientific articles in peer reviewed journals or conference proceedings.  He is currently serving as a member of editorial board for 9 scientific journals including “Current Chemical Research”, “Sensors & Transducers”, “SciFed Nanotech Research Letters”, “International Journal of Sensor and Its Applications”. He also holds an Adjunct Professorship at both Lakehead University and Western University in Ontario, Canada.