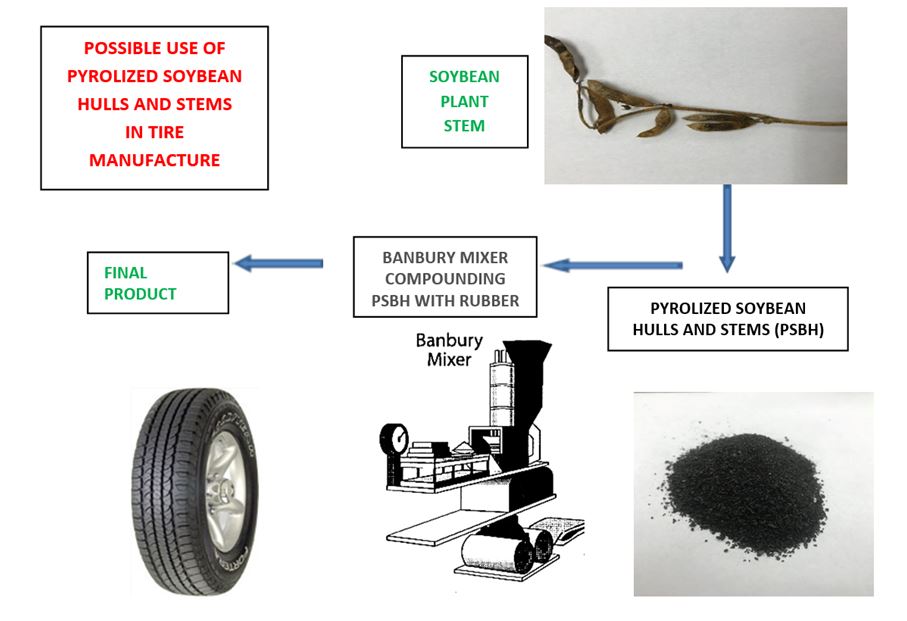 Tire industry insiders predict a surge in silica usage in tires during the coming years [1]. “Due to the rising environmental concerns, regulatory bodies have been giving incentives for both manufacturers and consumers to use performance tires. These factors have led to an increase in the production of high-performance and ‘green’ tires [1].” “As such, in recent years, silica has been used as an alternative filler to carbon black (CB) in tires. The adoption of silica in the production of green tires has reduced CO2 emissions by almost 7% and increased vehicle fuel efficiency [1].” CB is produced using an oil furnace process, which increases the carbon footprint. A solution to this problem is CB replacement by eco-friendly fillers. Partial replacement of CB by fly ash (FA) [2], or pyrolized biomass is discussed in this presentation. We can increase adhesion between brass coated steel cord and styrene butadiene rubber (SBR) by using silica as the main filler in SBR compounds. When the main filler is CB, partially replacing it with FA (up to 5 phr) improves or matches the adhesion with CB only as induced by the anionic character of silica in FA. Ball milling can improve the mechanical properties of the CB/FA/SBR, as attributed to the increased interface area and reduced particle size of the FA. Tensile strength and elongation at break increase as silica partially replaces the CB, due to the synergic effects of hybrid filler usage with up to 10 phr FA. Modulus at small (2%) strain and hardness also increase by partially replacing the CB with silica, as attributed to the enhanced filler-filler interactions; and the same properties increase or remain approximately constant when replacing CB with FA by up to 10 phr. When we use up to 10 phr FA in the CB/FA/SBR compound, the rolling resistance decreases, as attributed to increased silica by FA usage. The addition of FA improves wet grip as the addition of FA interferes with the filler network, so that the SBR molecules are more flexible [2]. Pyrolized (P) or torrefied (T) biomass, such as sorghum (S) [3], or soybean hulls (SBH) [4] can also be used for partial CB replacement in tires. By using the optimum torrefied sorghum (TS) concentration of 30 phr for reinforcement in partially replacing CB, the SBR compound exhibits good cure behavior and mechanical properties along with higher wet-skid resistance and lower rolling resistance. In addition, ball milled TS filled SBR compound shows higher tensile strength and strain at break compared with untreated TS filled version. Similarly, ball milled PSBH filled SBR compound shows higher tensile strength and relatively unchanged elongation at break and low strain (10%) modulus when added up to 15 phr. The wet skid resistance increases, and the rolling resistance decreases when PSBH is added up to 30 phr.

Erol Sancaktar received his Ph.D. (Engineering Mechanics) and M.S. (Mechanical Engineering) degrees from Virginia Tech. He is a Fellow of ASME, and has served as Chair of ASME Tech. Committee on Reliability Stress Analysis, and Failure Prevention (1997-2008, 2013-present). He served as Associate Editor for the ASME J. Mech. Design (1995-2006) and Medical Devices (2006-2013). Dr. Sancaktar has also served as member of the Editorial Board of J. Adhesion Sci. and Tech. (1993-2013), Current Nanoscience (2009-2016), Int. J. Polymer Sci. (2008-2017), Recent Patents in Chemical Eng. (2007-2017), Nanoscience & Nanotechnology-ASIA (2010-2016), Reviews of Adhesion and Adhesives since 2012, and J. Adhesion since 2013. Dr. Sancaktar organized 29 Conferences. He was a faculty member at the Mechanical Engineering Department at Clarkson University during 1978 to 1996 before joining University of Akron in 1996 as Professor of Polymer Engineering. He has also been appointed Professor of Mechanical Engineering since 2009. He edited 24 books, authored over 110 refereed journal articles, 30 articles in books edited by others, including 2 chapters in ASM Engineered Materials Handbook, as well as two chapters in Handbook of Adhesion Technology by Springer. He has delivered 240 technical presentations, and has 4 patents. Dr. Sancaktar had 63 graduate students (16 Ph.D.’s) complete their degrees; so far, under his direction. Dr. Sancaktar’s research interests include: Mechanical behavior of adhesives, polymers, composites; materials characterization; viscoelasticity; fracture mechanics; experimental and theoretical solid mechanics; design and manufacture with novel materials; elastomer/rubber/tire behavior and processing; wet friction, polymer-based friction elements; excimer laser applications in polymers for adhesion enhancement, process evaluation and nanopatterning; design and manufacture of responsive membranes; electrically conductive adhesives and polymers; utilization of torrefied/pyrolized biomass as fillers in polymers; nanoprocessing, nanocomposites and nanodevices.