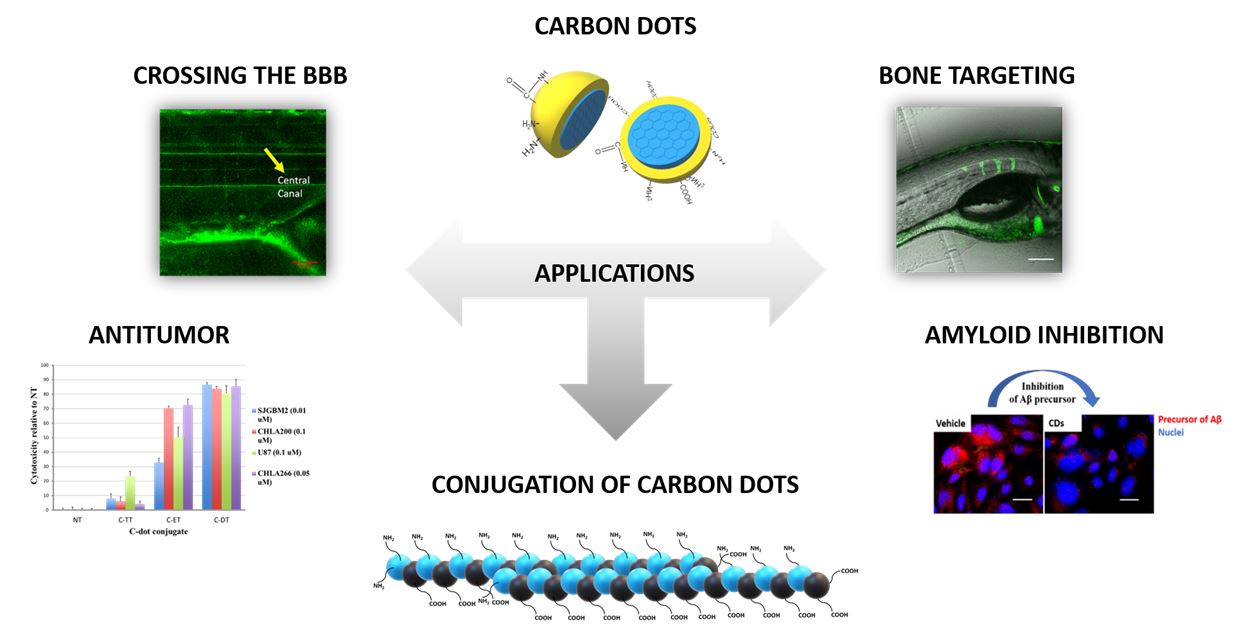 Carbon dots (CDs) with size less than 10 nm have recently triggered great attention in the research of material science and biomedical engineering due to their unique properties such as small size, excellent photoluminescence (PL), high water-dispersity, biocompatibility, nontoxicity and abundant surface functionalities [1]. They have been widely explored for applications in printing, photocatalysis, bioimaging, sensing, drug delivery, and nanomedicine [2,3]. In this presentation, I will discuss about the diverse preparations and characterizations of different types of CDs. These CDs were prepared from either “top-down” or “bottom-up” strategies and rigorously characterized by spectroscopies (UV/vis, fluorescence, FTIR and XPS), microscopies (AFM and TEM) and other commonly used techniques such as mass spectroscopy, TGA and zeta potential. I will also discuss about various applications of the CDs developed in our lab. (1), a major medical challenge one faces to treat central nervous system (CNS) related diseases is to cross the blood-brain barrier (BBB). Recently, in vivo experimental observations suggested that plenty of CDs developed in our group could cross the BBB to enter the CNS of zebrafish and rats with different mechanisms; (2), thanks to the abundant carboxyl groups on the surface, CDs prepared with carbon nanopowder could be conjugated with transferrin and two anticancer drugs to construct a triple-conjugated drug delivery system. The system showed a synergistic effect on the treatment of glioblastoma brain tumor; (3), our study has shown that CDs prepared with carbon nanopowder bind to calcified bone structures of live zebrafish larvae with high affinity and selectively. Furthermore, we have observed this property is unique to the CDs developed from carbon nanopowder and other CDs preparations did not show any interaction with the bone. These observations support a novel and revolutionary use of CDs as highly specific drug delivery carrier; (4), CDs have constantly shown the capability to inhibit beta-amyloid (Aβ) secretion and fibrillation, which exhibits a great potential of CDs as an effective nanomedicine and drug nanocarrier to treat Alzheimer’s disease (AD); (5), a pilot study showed a versatile nanocarrier could be assembled via the direct conjugation between distinct CDs to fulfil multitasks.

Professor Roger M. Leblanc thanks the support from National Science Foundation under the grant 011298. Also, he gratefully acknowledges the great support from King Abdulaziz University, Kingdom of Saudi Arabia, and University of Miami, USA.

Roger M. Leblanc received his B. S. in chemistry in 1964 from Université Laval, Canada, and Ph. D. in physical chemistry in1968 from the same university. From 1968 to 1970, he was a postdoctoral fellow in the laboratory of Prof. George Porter, FRS, in Davy Faraday Research Lab, the Royal Institution of Great Britain. He was a professor from 1970 to 1993 at Department of Chemistry and Biology in Université du Québec à Trois Rivières, Canada. During this period, he was Chair from 1971 to 1975 at the same department, and Director from 1981 to 1991 at Photobiophysics Research Center. In 1994, he moved to University of Miami, where he has been a professor at Department of Chemistry since then to present. At University of Miami, he was Chair of Department of Chemistry from 1994 to 2002, and he is appointed as Chair from 2013 to present. He was also one of the three editors of Colloids and Surfaces B: Biointerfaces from 1998 to 2013. During his early career as a scientist, his research interest was on the photosynthesis and photoconductivity using surface chemistry and spectroscopy. His current research interest is to apply 2-dimensional (2-D) surface chemistry combined with spectroscopy and microscopy to investigate the physicochemical properties of carbon dots (CDs), and utilize diverse cell lines and animal models to study the drug delivery with CDs as promising nanomedicines and/or nanocarriers to treat Alzheimer’s disease (AD), pediatric brain tumor and COVID-19. In addition, he is also interested in other CDs-related applications including printing, photocatalysis, photosynthesis, thermoelectricity, bioimaging, and the development of biosensors with high sensitivity and selectivity for diseases diagnosis. He has published 520 scientific articles in peer-reviewed journals. As a professor, he has supervised more than 100 M.S. and Ph.D. students.