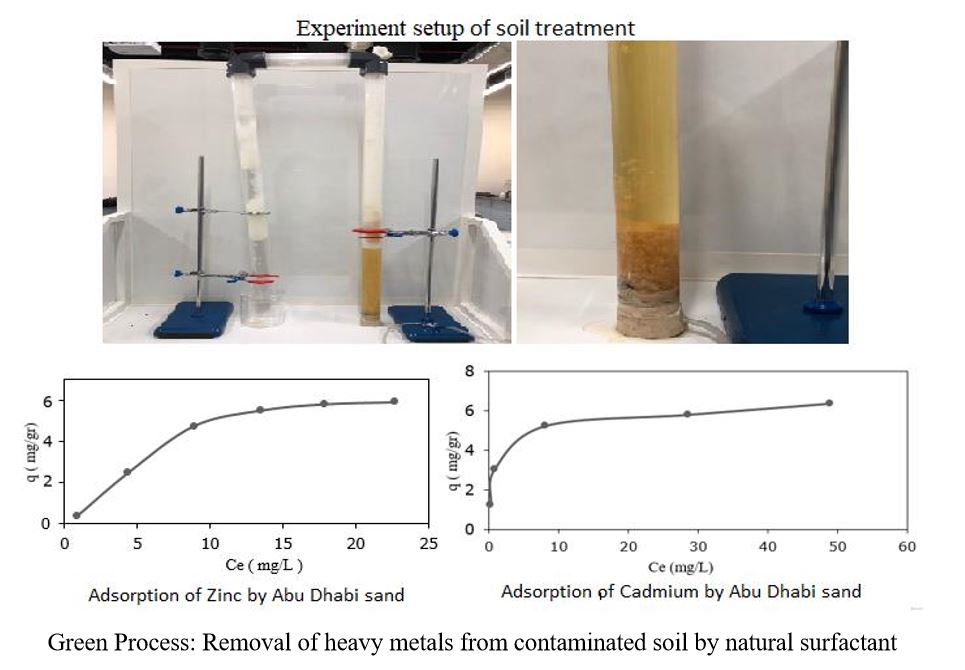 Metallic ions Cd, Pb and Zn are one of the most difficult contaminants to remove from the soil. As part of the program of protecting the environment in Abu Dhabi city, the use of readily available natural materials as adsorbents of heavy metals from contaminated soil is investigated. This research proposes a novel green process for removal of these elements from contaminated soil using natural surfactant extracted from plants collected from the United Arab Emirates environment.

The proposed technique could be used at low cost and with great efficiency in the purification of contaminated water. The method used in this research was established in order to develop a comprehensive technique that reduces the heavy metal concentration to an acceptable level. The surfactant is tested in a bubble column. The foam was collected and analyzed using ICP and the stability of the form was investigated.

The authors would like to extend their gratitude to the research office of Abu Dhabi University for supporting this research.

Omar Chaalal is an Associate Professor of Chemical Engineering at Abu Dhabi University (ADU). Chaalal is an internationally renowned expert in the separation technologies. He is the inventor of the EnPro Process (Norwegian Company) that deals with the sequestration of carbon dioxide and global warming reduction.

He has undertaken several successful research projects related to CO2 cleaning in Natural Gas and subsequently two patent applications have been filed for the use of this technology. The benefits of these patents were, in addition to the environmental benefits, used in the treatment of large quantities of desalinated formation water in the oil field. Chaalal has pioneered among others the use of seawater and ammonia to reduce the effect of carbon dioxide on the environment.

Chaalal was an associate professor of Chemical Engineering at Ibn Khaldoun University Algeria, as well as at the United Arab Emirates University. He was the Chief Scientist of Enpro As. Norway, a member of Al Mobdioon Center of Excellence and innovation of King Abdul Aziz University (Saudi Arabia), an Advisory Board of IIB environmental Company in Japan). In 2016, he filed a patent application in the United States in the name of Abu Dhabi University. The work is related to the Enhanced Oil Recovery.