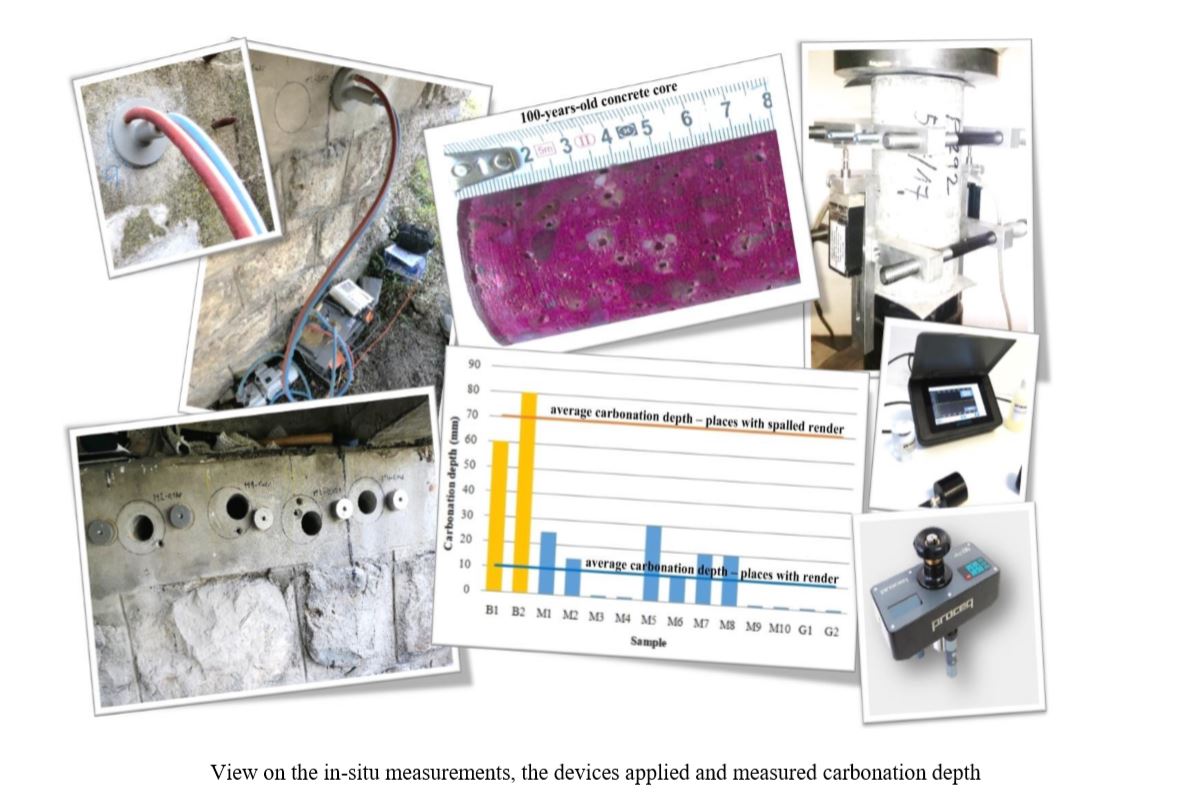 The research study performed on 100-years-old concrete bridges shows that a thin layer of cement-based protective render coat (PRC), typically 2 - 4 millimetres thick can significantly reduce the carbonation rate of underlying concrete. The obtained results from in-situ and laboratory research give the realistic explanation of this phenomenon. The tests were covered by visual observations of the bridge and site-determinations for in-situ diagnostic procedures: 1) testing concrete by hardness method using Schmidt hammer, model N, 2) ultrasonic examination of concrete using PUNDIT apparatus; 3) measurements of surface tensile strength of concrete using square breakaway targets; 4) measurements of surface permeability of concrete and PRC by Torrent air permeability test [1] for checking the surface permeability of uncovered and PRC-treated concrete and 5) carbonation depth by phenolphthalein test. The taken cylindrical cores with diameter 100 mm and length at least 300 mm were tested in the TSÚS laboratory for volume density, dynamic and Young´s modulus of elasticity, and compressive strength. Consequently, PRC and two concrete sub-samples were chosen for in-deep detail verifications in a laboratory– surface: directly exposed to prolonged exposure to CO2 and – internal: covered with an overlay of concrete kept out of direct contact with open air. All samples were submitted to XRD, TG-DTA, MIP, SEM, HR optical microscopy and chemical. The degree of carbonation, degree of modification changes and four stages of carbonation (I – IV) are according to our methodology determined [2,3].

The dependence of decisive significance was found between the surface permeability of the PRC and the carbonation depth of the underlying concrete; the PRC thickness indicates only a minor significance. The PRC non-permeability for CO2 penetration is a basic condition for the apparent mitigating and even complete stopping carbonation attack of underlying concrete. The thin PRC layer is characterized by a dense carbonate substance even up to the amorphous state boundary, which is referred to as “carbonate milk”. Optical microscopy shows firstly invisibly but later demonstrably accumulated carbonation milk within the thin PRC layer; SEM technique shining needles confirming the presence of crystal-developed coarser CaCO3 compressed within the PRC thickness. By this way the spatially sealed barrier of carbonation products is created in the PRC preventing thus carbonation of 100-year-old concrete effectively. The following conclusions are based on the results obtained from this study until now:

1) The close correlation between the surface permeability of PRC and carbonation depth of underlying concrete.

2) The 2 - 4 mm layer of thin protective render coat is proven as an effective anti-carbonation barrier.

3) The assessment of aggressive action of CO2 on concrete based on the degree of carbonation, degree of modification changes and four stages of carbonation is an appropriate method for diagnosing the concrete attacked by carbonation for a long time.

4) The field experiments are followed by a laboratory phase of PRC development from currently available building materials with the effort to apply the knowledge gained by the diagnostics of old bridges to increase the service life of existing concrete bridges with the small reinforcement cover.

The author wishes to express his gratitude to the Slovak Agency for Research and Development (project APVV No. 17-0204) for financing this research work.

Ivan Janotka is the Head of Department of Material Research and the Senior Research Fellow at the Building Testing and Research Institute, Bratislava, Slovakia. He was the member and/or principal investigator of five international EU projects within period 1993 – 2015, and worked at the Slovak Academy of Sciences until 2009. In 2014 was awarded as the Honour of Science and Technology of Slovakia, in Ottawa 2015 by K. H. Mehta Award for Pozzolanic and Cementitious Materials given by the American Concrete Institute and in Stockholm 2019 by the Scientist Medal for the Research Contribution in Advanced Materials given by the IAAM. He defended his D.Sc. thesis in 2015. His work is focused on innovative development in concrete technologies and improvements in durability. In 2020, he prepared a separate chapter on the 5-year sulphate resistance of hybrid cement in the Compressive Strength of Concrete book issued by INTECH OPEN (open access). Ivan´s work concern 57 publications, 711 citations, h-index = 17 registered in Web of Science, more than 200 papers in non-indexed databases and at world conferences (e. g. CANMET/ACI, RILEM/ACI, IAAM), CEMENT CHEMISTRY, EUROCLAY, EUROGEO, fib CONGRESSES, etc. as well as more than 200 outputs of contracted research made for the industry.