Synthesis, dispersion, and tribological performance of alkyl-functionalized graphene oxide as an oil lubricant additive, and synergistic interaction with IF-WS2 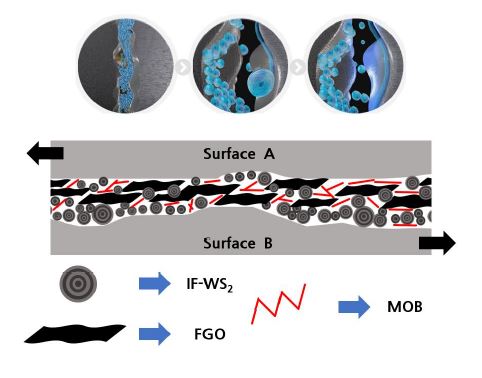 Graphene and Inorganic Fullerene type WS2 structures (IF-WS2) are two-dimensional (2D) materials with excellent lubricant property. They reduce the friction between contact surfaces.However, graphene is synthesized as a form of graphene oxide (GO) with a number of oxygen functional groups occurring on the surface, due to which it is difficult to use as a hydrophobic lubricant. Thus, this study synthesized functionalized graphene oxide (FGO) by attaching the alkyl chain to the surface of GO. The synthesized FGO enhanced the lipophilic property due to the alkyl chain. In addition, 1-methyl-2,4-bis(N-octadecylurea)benzene (MOB) was synthesized and added as a gelator to improve the durability of the dispersion. FGO was synthesized via two-stage reaction in which the alkyl chain was introduced by reacting with alkyl chloride after modifying GO to NH2-GO. MOB was synthesized by reacting with octadecylamine and toluene-2,4-diisocyanate. To analyze the morphology, microstructure, and functional groups of GO, FGO, and IF-WS2, scanning electron microscopy (SEM), transmission electron microscopy (TEM), and Fourier transform-infrared (FT-IR) spectroscopy were performed. To analyze the binding energy, X-ray photoelectron spectroscopy (XPS) was performed. X-ray diffraction (XRD) and Raman spectroscopy were conducted for crystalline analysis. The synthesized FGO, WS2, and MOB were added to poly alpha olefin4 (PAO4) and distributed via ultrasonic processing. The friction characteristics were analyzed with the four-ball test and high frequency friction/wear tester. The lubricant, which was gelated by adding MOB,maintained dispersion even after 30 days. The wear track size and friction coefficient of PAO4 oil containing 0.1 wt.% FGO6, 1 wt.% IF-WS2, and 1 wt.% MOB were reduced by 21% and 13%, respectively, compared with those of PAO4 oil lacking the solid lubricant, which verified the improved wear resistance. The characteristics of tribology were also improveddue to the synergistic interaction between FGO and IF-WS2.  ​

The study results were based on the "Leaders in Industry-University Cooperation +" Project, supported by the Ministry of Education and National Research Foundation of Korea.

Chang-Seop Lee received his B.Sc. and M.Sc. from Kyungpook National University, Daegu,South Korea in 1979 and 1981, respectively. He received his Ph.D. degree from Oregon State University, U.S.A., in 1991. Presently, He is a chemistry professor in Keimyung University, South Korea. He has published more than 135 research papers and 19 books, and also enrolled 41 patents in the fields of surface chemistry, electrochemistry, sensors chemistry,rubber chemistry, fiber chemistry, lubricants and composite materials.He is the vice president of Korean Federation of Science and Technology Societies (Daegu regional Federation).